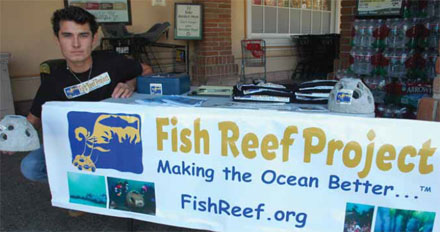 MARINE DREAM — Tyler Van Der Lip distributes information on a plan to create a manmade reef at Paradise Cove. The small igloo-like object Van Der Lip is holding is a scale model of one of the reef balls that would be placed on the ocean floor to create the reef. The balls are hollow to provide habitat for marine organisms and flat on the bottom to maintain anchorage.

The project is the brainchild of fishing activist Chris Goldblatt, who grew up in Paradise Cove. The reef balls, which can weigh up to 1000 pounds are made of concrete, sand and silt dredged from harbors, and ground oyster shells. Placed on reef-less expanses of mud and sand, they would provice anchorage for kelp forests, habitat for a wide range of marine life, according to Goldblatt. “It’s like planting trees in the Amazon,” Goldblatt told The Malibu Surfside News during an interview last year. Goldblatt says that the reef would become an underwater oasis in a desert of mud where no reefs currently exist.